Did you know that The Netherlands recruited 3000 men in Elmina (now Ghana) in the 19th century and shipped them to Dutch East Indies (now Indonesia)?  These African soldiers lived in Java and Sumatra. They started a family with local women. Their offspring is called Zwarte Hollanders, Black Dutchies or Londo Ireng in Javanese. Today the Zwarte Hollanders diaspora resides in Indonesia, The Netherlands, Ghana and USA. 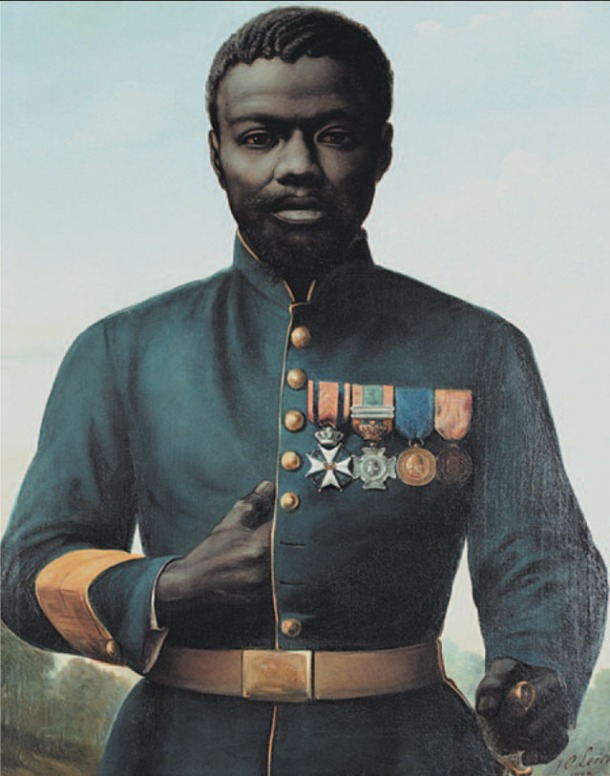 Background
In early 1800es European soldiers in service of Royal Netherlands East Indies Army (KNIL Koninklijk Nederlands Indisch Leger) were not resistant to tropical heat in Dutch East Indies (Indonesia now), some passed away during the service. Therefore the KNIL leaders sought for an alternative to strengthen the troops. The choice fell on Africans. Due to strong physique and similar tropical climate in Africa and positive experiences with African soldiers in Suriname, it was decided to set a huge recruit  there.

Between 1831 – 1872 The Netherlands recruited circa 3000 soldiers in Ghana. King Willem I concluded a treaty with koning Ashanti about soldiers supply. Two Ashanti princes Kwasi and Kwame, came to Delft, The Netherlands as pawns. Their story has been retold by Dutch writer, Arthur Japin in his book De zwarte met het witte hart. Those recruited men in Elmina were mostly slaves. They bought themselves freedom from their wages paid as soldier in advance by the Dutch.

Who were they?
The soldiers came from various tribes in West Africa. They belonged to Mossi, Fanti, Dagomba or Grushi. These West African tribes were all called Donko. Despite this collective name, Donko, the men had nothing in common. Some were Muslim other Christian while the rest practised their indigenous belief. They even didn’t speak the same language.

The recruitment was executed by buying the slaves at the slave market in Kumasi. Some recruited soldiers were free men, they volunteered for this. Others were war prisoners. All of them were transported to St. George d’ Elmina castle where the recruitment procedure took place, they were tested and officially enrolled as soldier.

In general the recruited soldiers signed a 6 year contract. A couple of them signed for two terms, 12 years. After serving the period they were free to renew the contract or quit.

During registration the majority of the soldiers received new names because Dutch military found most African names difficult to pronounce.

Jacobus Jol with his daughter and son in law. Jol was recruited in 1862.

Arrival
After a 3 month trip by ship the soldiers arrived in Batavia (now Jakarta) Dutch East Indies. Dutch military elite gave them the same status as Dutch citizens there. The purpose is to create engagement and loyalty to prevent mutiny in the units. As expected the soldiers adjusted themselves easily. Another reason of granting this special status was to present this covered slavery as a normal military contract. FYI: British officially ebolished slavery in 1834. British government started to wonder whether the recruitment (from 1831 – 1872) was not slavery. The Netherlands ebolished slavery 29 years later, in 1863.

In the military
The African soldiers were sent to fight in Sumatra (Lampung war 1826-1856, Padri war 1821 – 1837, Aceh war 1873 – 1914), Bali (Jagaraga battle with three expeditions 1846 -1848), Timor (now Timor Leste 1857) etc. The Dutch military top was content of African soldiers’ performance. KNIL personnel consisted of European, African and local soldiers. The locals came mostly from the East of the country; the Moluccas and Sulawesi (Celebes). Due to their status as Dutch citizens African soldiers were placed on top of the hierarchy together with the Europeans.

However, with time the African privileges were decreasing. They got less than promised. To make it worse, African soldiers were divided to sleep on the same mattress as the Moluccan soldiers. According to reports Zwarte Hollanders didn’ t accept this treatment, they went on mutiny in 1838.

Figures
KNIL recruited estimated 3.068 Africans. From this total number of recruited soldiers there is registration data of 2.336. 456 of 2.336 solders stayed in Dutch East Indies. They settled in following places:

All the places are cities and towns in Java. A few of KNIL Zwarte Hollanders settled outside Java; Padang (2), Medan (2) and Ambon (2). The rest of recruited men emigrated to Elmina. They established a neighbourhood which is called Java Hill now.

The godfather of Indo – African community, Piet Klink with his wife Nakiem photographed in Semarang ca 1928.

Community
A couple of men of the 456 who stayed in Dutch East Indies became the forefathers of Indo – African diaspora. Living with their concubines these forefathers started their family. By a royal decree of King Willem III dated August 30 1859 a huge lot in Purworejo was given to the first retreated KNIL African soldiers as gratuity for their service and merits. This was an exceptional gesture because at that time it was difficult to purchase a land.

At the lot there were 32 houses from the following African soldiers with their families: Bofar, Cordus, Klink, Hofman, Maurik, Huidecoper, Columbus, De Ruiter, Hoed, Land, Keijzer, Wijk, Beelt, Kooi, Paulus, Zeller, Molemans, Tangand’e and Artz. These men were forefathers of Indo – African diaspora. And this lot in Purworejo, Central – Java has been called Afrikaanse wijk or Kampong Afrikan (African neighbourhood) since that day.

Despite being and feeling Dutch, the community has preserved a bit of their African identity mixed with the local ones. So they children and grandchildren were raised Dutch way but loved to eat Indonesian food. They spoke Dutch and Malay. They even considered themselves as Dutch. 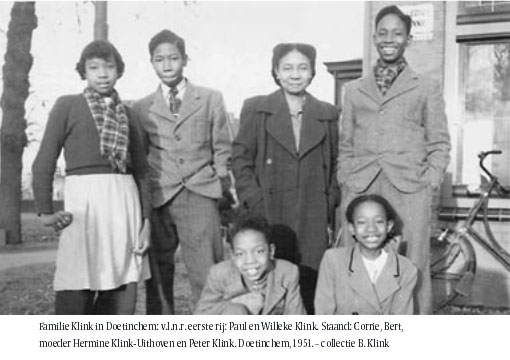 Offspring of Piet Klink in Doetinchem, The Netherlands 1951

After 1949
A number of Zwarte Hollanders left Dutch East Indies after 1872. Most of them studied and stayed in The Netherlands voluntarily. Some of them went back to Africa. After decolonization of Dutch East Indies in 1949, now an independent new country Republic of Indonesia, Indo – African community was given two choices by The Dutch government. Staying in Indonesia and becaming this new country’s citizen or repatriating to The Netherlands as they were Dutch citizens in the first place.

This was a confusing choice to make for Indo African community. They were proud of being 100% Dutch according to the status their forefathers had but leaving the familiar Indonesia was hard. Indonesia was their home and most of them had not been to The Netherlands before. Those who chose to come to The Netherlands suffered from identity crisis. They felt more Dutch in Indonesia but at the same time they did not feel welcomed in The Netherlands, their own country on paper. Some of them decided to imigrate to the USA, others stayed.

In the book Zwarte Huid, Oranje hart Afrikaanse KNIL – nazaten in de diaspora (Black skin, orange heart KNIL  African offspring in the diaspora), the writer Griselda Molemans, descendant of the Molemans in Purworejo, brings the readers to a life in Kampong Afrikan retold by the descendants of Zwarte Hollanders. In that book she interviewed Indo – African families living in Indonesia, The Netherlands and the USA. Read the behind the the photographs stories written by the photographer of this book, Armando Ello.

The current generation of Zwarte Hollanders is a mix of races. It is interesting some have preserverd family pictures and stories. What I personally have found interesting is that not so many people know about this. My husband and I have friends who are descendants of Zwarte Hollanders. Their surnames are the same as the forefathers mentioned.

In The Netherlands there is a foundation for descendants of the Zwarte Hollanders. It is called Indo Afrikaans Kontakt. On its website the foundation shares updates, activities and news about the community.